HomeEventsCinemaFilms at the cinema in Naples in January 2020 with Checco Zalone and Aldo, Giovanni and Giacomo
Cinema ,Events

Films at the cinema in Naples in January 2020 with Checco Zalone and Aldo, Giovanni and Giacomo

From Checco Zalone to Aldo, Giovanni and Giacomo, passing through Robert Downey Jr. Here are the times, prices and plots of the films in the cinemas of Naples in January 2020.

The new year starts with interesting film also in the cinema of Naples, films coming out in theaters in the month of January 2020.

Among the most anticipated films we find the new work by Checco Zalone, Tolo Tolo, a controversial story of an Italian migrant who finds himself having to return to Italy from Africa on the migrants' routes.

Don't miss the new fun movie by Aldo, Giovanni and Giacomo that never cease to excite us and make us laugh.

Also Robert Downey Jr back to the cinema with the Doctor Dolittle, while the little ones cannot miss the new Doraemon movie.

Ecco timetables, prices and plots of the films in the cinemas of Naples.

Checco Zalone's new film tells us the story of an Italian who is forced to emigrate to Africa. Here, however, the war forced him to return to Italy, but following the route of migrants.

A film based on the famous novel of the same name by Louisa May Alcot and which tells the story of a family made up of women who are constantly growing.

A portrait of the political and human history of the former Italian Prime Minister Bettino Craxi.

Clint Eastwood's new film about the story of a security guard accused of being an accomplice in an attack, even though he was considered a hero until then.

Me against you the film - Revenge of Mr. S

The two famous YouTubers Luì and Sofì, who make up the couple "Me against you", land in the cinema to the delight of all the kids.

In the midst of the First World War, two British soldiers must complete a mission which is almost impossible.

Nobita communicates to her class that she has seen a moon turn yellow and decides to find out why, even if everyone thinks it's just a story.

The film is based on a famous monologue recited by Valerio Mastandrea and written by Mattia Torre, entitled "Children grow old".

Set in Montfermeil, on the outskirts of Paris, the film tells the story of Agent Ruiz who discovers the reality of battles and gangs in the capital's banlieux.

The new film by Aldo, Giovanni and Giacomo set during a summer made of friendships and love.

Robert Downey Junior and Tom Holland return to the cinema staging the famous story written by Hugh Lofting in the 20s. 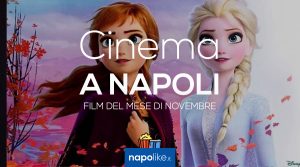 The Chalet Ciro at Naples Central Station: coffee and ...

Riccardo Muti at the San Carlo in Naples directs Chicago ...