The Magic World water park in Licola will reopen as Pareo Park with a Palazzetto della Musica from 20000 places directed by Mogol!

After so many negative vicissitudes, finally the Licola's Magic World will reopen under the name of Pareo Park and he will do it in less than three months. In fact, 2017 is expected to re-launch the thematic entertainment area first, that is, the amusement park, which will be followed by the opening of the water park true.

The novelty, however, consists in the realization of a great Palazzetto della Musica whose artistic director will be the maestro Mogol, the stage name of Giulio Rapetti, historical lyricist, writer and Italian record producer who will contribute to the rebirth of the entire park.
The structure will be called New Magic World, and was taken over by the company Partenope Investment srl, after the auction, whose sole director is Vincenzo Schiavo, honorary consul of the Russian Federation in Naples and Campania, who announced the news to the TgR Camapania of 27 January.

As mentioned, the Palazzetto will be directed by Mogol and will have a capacity of 20000 posts. It will therefore be a very wide location that will host many types of events. The construction of the parking area will start by the end of the 2017, while everything will be built for the first half of the 2018 and to its realization will contribute the best names of the Italian economy and culture. The Palazzetto will be afuturistic and highly technological work and the idea is to make it one of the most important musical reference points in Italy, bringing great names of Italian and international music to perform.
The collaboration with the CET (the European Center of Toscolano), the school of Mogol, is also taking place on site.

The other areas of the Magic World - Pareo Park

In addition to the Palazzetto della Musica, the theme park and the water park will start again. Moreover, the project of rebirth foresees the opening of a hotel and numerous business, to ensure that all-round economic revenues are created. 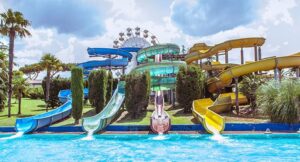 Magic World of Giugliano: the water park reopens with many new features 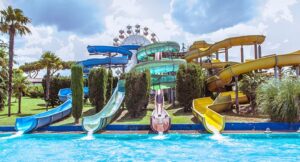 Save the Magic World, an event for the reopening of the Giugliano water park

Raiz and Fausto Mesolella in concert at the Bolivar Theater in ...