A poor ingredient, the beans become the protagonists of a recipe to be licked with a white pizza with pecorino cheese.

A greedy vegetable makes it white pizza with beans and pecorino cheese tasty, tasty and perfect for the first outings. With ours prescription you will be able to prepare a really exquisite pizza.

The pizza, symbol of Neapolitan, now in the Campania region is prepared in one thousand and one ways. The most ancient recipes see it garnished with poor ingredients or even considered waste and, in some cases, the pizza was just what was discarded in other preparations or that it appeared to be in surplus.

The spring period sees the growth of many first fruits such as peas and lees Fava beans and, the latter, much loved in the south, are the poor ingredient that enriches our pizza making it tasty, tasty and perfect for picnics.

Fate boil the beans in plenty of lightly salted water and deprived of their skin big ones. In a pan, make fry the spring onion cut finely and revise the beans making them flavor well adding a ladle of their water cooking to ensure that they cook completely.

After kneading it and making it grow, roll out the pizza dough with the help of the hands two discs and placing them in two oven-baked baking pans just oily or covered with parchment paper. Garnish the two pizzas with the mixture of onions and broad beans pepper it to taste. Garnish with pecorino cheese and bake at 180 ° 200 ° for about 10 minutes or until they are well browned above and below (everything will depend on your oven). Once cooked, take out the pizzas and serve hot.

Notes from the cook

This version is also suitable for vegetarians, but as good Neapolitans we can not help but suggest one variant who sees white fava and pecorino pizza enriched with strips of stretched pancetta just blanched in the broad bean pan. 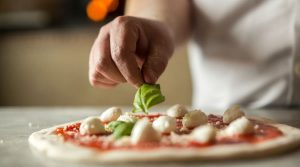 PizzArt Happening in Herculaneum, the feast of taste and art 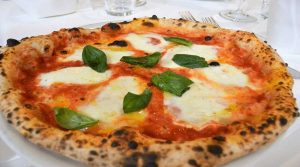 TuttoPizza 2019 in Naples at the Mostra d'Oltremare, the professional pizza show

Aperol Happy Together: on the seafront of Naples the free concert ...

Closed the exit of Corso Malta of the Naples ring road to ...